The Nelson Society and The Murray Club invite you to a joint Dinner to commemorate the Battle of Copenhagen, at 7.00pm on Sunday 3 April 2022 at the Chichester Park Hotel, Chichester, West Sussex. The speakers will be Richard Plowman, Chairman of The Murray Club, and the local Sculptor Vincent Gray MRSS. This event is to be held on the first anniversary of the unveiling in Chichester of Vincent Gray’s life-sized sculpture of Admirals Murray and Nelson, which stands outside the Council House in North Street, only yards from Sir George Murray’s former home, now the Harbour Hotel.

The Dinner will cost £35 for three courses, including a glass of port.

A Booking Form for the Dinner can be obtained from Brian Gibbs at briangibbs@hotmail.co.uk or telephone 01246 203924.

On the morning of Monday 4 April, members can join an escorted walking tour of historic Chichester, following the Murray Trail to include a viewing of the Murray/Nelson statue. The walk will be preceded by a complimentary coffee and biscuits at the Council Chamber in North Street, hosted by the Mayor.

Members should book accommodation direct with the Chichester Park Hotel. Rooms are available on Sunday night at £70.00 for a Double or Twin Room, and £60.00 for a Single Occupancy Room. Members can stay on the Saturday night, subject to availability, at £90.00 for a double/twin and £80.00 for a single room. All rates include Breakfast. Chichester Park Hotel, Madgwick Lane, Westhampnett, Chichester, West Sussex PO19 7QL. Tel: 01243 817400 email: www.chichesterparkhotel.com.

In February 1801 Murray exchanged from HMS Achille into the Edgar 74, and on 2 April, led the attack at the Battle of Copenhagen, having been chosen by Nelson, and this battle was considered to be his finest hour. After the Battle of Copenhagen Nelson wrote of Murray “Murray of the Edgar leading the van set a notable example of intrepidity which was followed by every captain, officer and man in the squadron”. 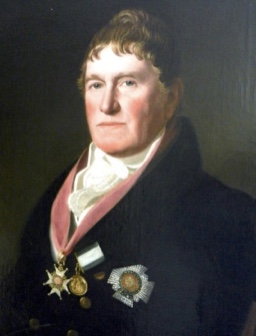