This Grade II listed structure was erected by Alexander Davison in 1807 adjacent to “the old post road” (later the A1) and is now bypassed by the dual carraigeway north of Felton. 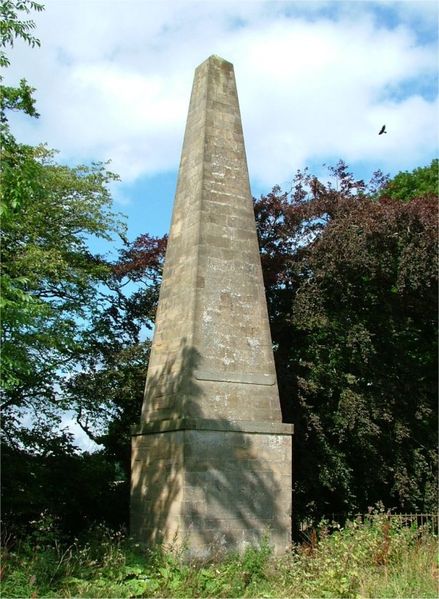 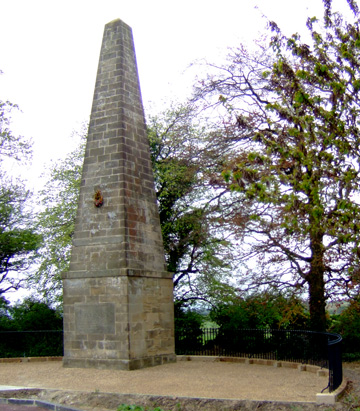 Born in 1750 at Lanton in North Northumberland, Alexander left home in 1767 to seek his fortune in London. Later he sailed to Canada, where by 1782, together with his brother Goerge, he had become a successful merchant and ship-owner in Quebec. It was here that he first met the young Horatio Nelson, then captain of the Albemarle. Their friendship deepened when he counselled Nelson against offering marraige to a local “belle”, won the arguement and consequently was said to have saved him from jeopardising his career. 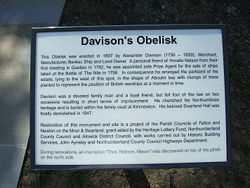 After the Battle of the Nile in 1798, Nelson appointed his friend as prize agent for the enemy ships taken. In appreciation, Alexander awarded medals to every man who fought in the conflict. As these were the only recognition given to ordinary seamen they were much prized and are still sought after today.

About 1800 he also devised a more visible memorial to the battle on land to the east of the house and west of the later obelisk, when he created a geographical replica of Aboukir Bay. Boundaries and ponds were formed to represent features within the bay. Clumps of trees, of which only four remain, symbolised the British warships and a curved track (now the C390) represented the French fleet. When viewed from his home, Nile Park would have been an impressive sight.

Alexander was devastated by the death of Nelson at Trafalgar; he had a prominent position in the funeral procession and many duties to perform in regard to Nelson’s financial affairs and Lady Hamilton’s numerous problems. In 1807 he erected the Obelisk. The stonemason was “Thos Robson” whose name was found carved on a north plinth during the renovations.

He was to serve another term of improsonment in 1808, convicted of “misappropriation of public funds”, when he charged commission on goods produced in his own factories. Harriott died in 1826 and Alexander in 1829 in Brighton. He is buried in the family vault at Kirknewton. The Obelisk is all that remains of his Swarland estate.

The Obelisk, lost for many years behind trees and undergrowth, has been refurbished with an official opening on 3rd April 2007. The work was funded by the Heritage Lottery Fund, Northumberland Country Council and Alnwick District Council.

Wikipedia also has an entry on the monument.

Further information regarding workshops and group visits can be obtained from the Clerk of Swaland Parish Council: Lisa Hamlin
01670 783495
lisa.hamlin@onetel.com