Think of “Nelson’s Column” and everyone’s attention swings at once to London and Trafalgar Square. But, mention this in Great Yarmouth, Norfolk and the townsfolk think of the 144 feet high column erected in the town in 1819 in honour of the “Norfolk Hero”. In fact, London had to wait until 1843 until Nelson’s Column was raised while Trafalgar Square wasn’t completed until 1867 –  sixty-two years after Nelson’s death. 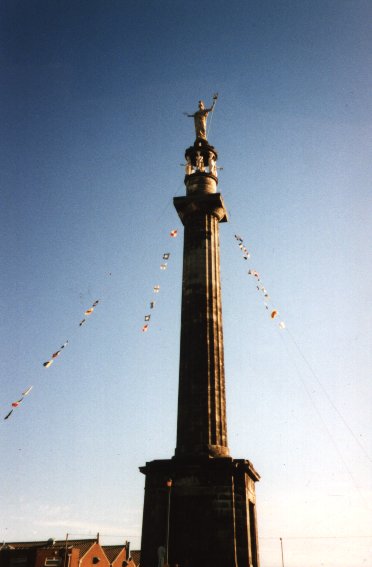 The Monument was erected by the County of Norfolk but the people of Yarmouth must have been proud when the organising committee agreed that the coastal town  was the right place to erect it. Known as the “Norfolk Column” it was conceived  during Nelson’s lifetime and was originally intended as a memorial to Nelson’s victory at The Nile but progress was slow and Nelson’s death changed its original purpose.

Large monuments require large sums of money and the  “Norfolk Pillar” was built at a cost of about £10,000, a very big sum in those days and it took several years to raise by public donations. It was designed by  William Wilkins and it features a huge figure of Britannia on a pillar  surmounted by coadstone gilded victories, dolphins, a galley and oars. The pillar is hollow and 217 spiral steps on the inside lead upwards to a splendid  view out across the North Sea. On completion a cottage was built nearby to  house the “Keeper of the Pillar” and its first incumbent had a good claim to the job.

James Sharman was a Yarmouth man who, at the age of fourteen,  was taken by a press gang in 1803 while working at the “Wrestlers Inn”, the inn Nelson had used in 1800 and 1801. By a twist of Fate, Sharman found himself aboard HMS Victory at the Battle of Trafalgar, which is proved by his entry in the ship’s Muster, and he claimed to have helped carry Nelson below when he was  fatally wounded. Sharman, too, was wounded and eventually discharged from Naval  Hospital to return to Yarmouth. He remained Keeper from 1819 until his death in  1867 but there is a strange little twist to this story because Sharman left his  own “memorial” in quite a remarkable way.

In 1827, Sharman performed an  act of great bravery in rescuing the crew of the brig Hammond that was wrecked on the beach near his cottage. Charles Dickens read the newspaper report and visited Sharman in his cottage in Yarmouth. Part of his novel “David Copperfield” is set in Yarmouth and Dickens based his character, Ham Peggoty, on  James Sharman. Not only did he fight in one of the biggest naval battles in history, but he lives on in one of the most famous pieces of English Literature.